Aims: Drug resistance enzymes like beta-lactamases and Extended-Spectrum Beta- Lactamases (ESBLs) are mostly produced in the response of mutation and a few other factors. These enzymes are plasmid-mediated that can confer resistance against several β-lactam agents including cephalosporin and extended-spectrum cephalosporin. This study is conducted to determine the frequency of ESBL producing Klebsiella strains and to compare the phenotypic detection methods among various clinical samples collected from a commercial centralized Microbiology diagnostic laboratory.

Materials and Methods: 125 Klebsiella strains were collected for this study. After identification and susceptibility testing, the phenotypic characterization of ESBL producing K. pneumoniae (n=89) and K. oxytoca (n=36) species was performed by using the double disc synergy test and the combination disc test.

Results: In our study, 80 (64%) Klebsiella isolates were found to be ESBL positive due to their ability to produce an extended zone of inhibition with combination disc whereas 45 (36%) isolates were ESBL negative with no extended zone of inhibition. The phenotypic findings obtained by using the combination disc method and double disc synergy method were re-confirmed by molecular methods. By comparing the phenotypic finding with the genotypic results, we identified 80 (64%) Klebsiella isolates as ESBL positive and 45 (36%) isolates as ESBL negative. These genotypic findings of the ESBL producing strains were similar to the results obtained from the combination disc method. It also confirmed that the double disc synergy test was unable to detect 47 ESBL producing klebsiella strains.

Conclusion: For implementing strict infection control policy and to stop the spread of resistant strains, it is important to detect ESBL producing isolates more rapidly. A suitable antimicrobial therapy can be started timely with the early detection of resistance enzymes either phenotypically or genotypically. It has been proved that the combination disc test can be used more reliably and preferably as compared to the double disc synergy test for the detection of ESBL enzymes produced by Klebsiella strains. 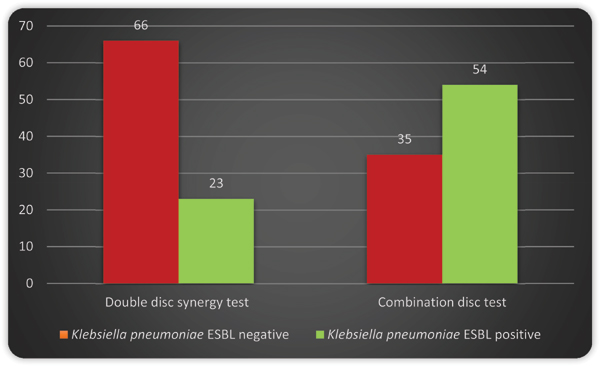